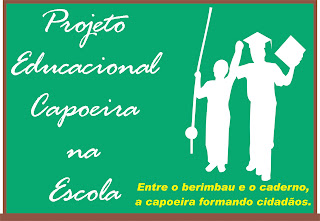 The Cultural Association Capoeira na Escola (Capoeira in the Scholl) – ACCAES - develops activities for twenty five (25) years in Florianópolis – Santa Catarina - Brazil, and always has been committed to the African descent culture as an instrument of socialization, inclusion, valuation and democratization, giving the opportunity and formation of criticize thinking citizens.
More than twenty thousand children and young people have been helped and taught in public schools like; Recanto da Criança e do Adolescente Municipal (RECRIA); Casas-lar; Escola Especial Leandro de Azevedo (APAE), and general community.
Due to numerous social and cultural developed projects, is described as an entity of state and municipal utilities.

Actions developed by the Association:

“Semana Afro-Biguaçuense” (African-Biguaçuense Week): Lectures, workshops, performances, films and discussion, in the week of the National African Descent Consciousness Day – November 20th  - Break down prejudgment and stimulate reflection on the problems and progress of African descent ethnicity in Biguaçu – Santa Catarina – Brasil, are its objective.

The “Intercambio Nacional de Capoeira” (National Capoeira Exchange): It’s an event that aims to enable students, and everyone that have interest, opportunity of deepening theoretical and technical aspects of Capoeira, knowledge Exchange with invited masters of this art,  integration and interaction with the group involved with the project.  It’s a time to strengthen the commitment to disseminate the African-Brazilian culture and stand up against all forms of racial discrimination.

“Subindo a Ladeira” (Climbing the Hill): This is a initiative that happens since 2000, promoting the realization of shows and demonstrations of the African descent culture, it happens biweekly, specially Capoeira games. The project goes to the hills and suburbs in order to provide integration between students from downtown with the neediest students and their communities, as well as entertainment, leisure and cultural learning and citizenship for all involved. At each stage, the project offers the visited community collected items such as clothes and toys, including two basic life support basket from private companies and public agencies. More than ten tons of food has been distributed in more than forty shows performed in several communities over the years;

Arte Especial para Pessoas Especiais (Special Arts for Special People): The adaptation and application of Capoeira art to people with special needs started in 2001 and many benefits have been shown by this audience. Physical improvement and socialization are some examples;

Fora das Drogas, Dentro da Roda (Away from Drugs, Within the Game): Monthly lectures on the importance of staying away from legal and illegal drugs and playing sports as a way to increase life quality;

Roda da Madrugada (The Midnight Capoeira Game): From midnight to dawn, every first full moon of the January month.

Festival “O Pulo do Gato” (The Cat’s trick): It is a festival that  stimulate and awards the best acrobatics skills of Capoeira and takes the time of the event to discuss slavery and its consequences in Brazil’s present. Happens every May;

Campeonato Jogo de Ouro (Game of Gold Championship): Competition that encourage training in pairs and also awards the best games of the day, evaluating dodges, overthrows, fluency in the game, etc. It happens in September;

Informative newspaper of the African Descent Culture: Semiannual publication with informative text with photos, calendars, news and plays related to the African-Brazilian universe.

“Moenda” (Milling) Study Group: Reunion for African Descent Studies. It is a presence and virtual meetings surveys and discussions related to the African Descent Movement;

In addition to the above actions, the Association has already materialized:

* Compact Disc (CD): Declaration of love for Capoeira: The group of students who are part of the Association recorded an album of Capoeira songs. It was released in the African “Biguaçuense” Week II and is the third CD of Capoeira Songs that was released in the state of Santa Catarina – Brazil. Self-esteem and musical development were the primary guides of this work.

* Book “Capoeira não é só jogo” (Capoeira is not just a game): Through the organization of texts published by members of the Association in various newspapers, websites and internal information itself, fulfilled the purpose of this book: to show that Capoeira is an excellent educational resource and formation of the Brazilian identity.